5 things you don’t know about me

Jessamyn tagged me for this. But I am going to be careful with where I take this.


So, how about those Commonwealths.....goes along with my favorite trivia question about the three states which do not observe Daylight Savings Time. That answer is easy....Arizona, Indiana, and Hawaii. The states which are officially Commonwealths are: Massachusetts, Pennsylvania, Virginia, and Kentucky. Puerto Rico is also a Commonwealth. I lived in Massachusetts for many years and six of my siblings were born there. My brother Paul lived in Kentucky when his son was born, and now lives in Pennsylvania where his daughter was born. My youngest sister lives in Virginia where her two children were born. So the only Commonwealth I have not been to is ...... Puerto Rico!

I'm guessing that since Jessamyn tagged me, I get to tag some others. I'm going to thank Tinfoil & Raccoon for alerting me, and tag her. I'm going to encourage my friends at Library Hacks to post (but since half the team is in Jamaica, that may take a few days). I think that the Free Range Librarian has done this, but I'm going to tag her again. I'm tagging fellow my fellow Councilor who writes so well in Library Dust, and finally, former Connecticut colleague and fellow library director Louise Berry.
Posted by Michael A. Golrick at 8:03 AM 3 comments:

Lacunae; Day 3 on the Road; Moving and photos

Well, it has been a bit. I finally posted the two post I had written about Day 2 on the road to Eau Claire. I have a photoset in Flickr with photos of the move including the first day at work (and more snow).

I spent the second night on the road with Nann Blaine Hilyard. I took a couple of photos of Chicago's skyline as I sat in rush hour traffic. I clearly need more practice at this type of photo.

The photos with the material in bins and on shelves were taken in her basement where she has an incredible set up for doing all kinds of quilting. She also has a great old card catalog cabinet which came from a library in Maine. She stores odds and ends in it. We woke up the next morning to the December 1 blizzard which hit Chicago and Milwaukee. You can see the car sitting in the driveway before we shoveled.

I headed out mid-morning, and drove through the snow. The Interstates were generally manageable. I stopped at one point, and wound up being interviewed by a Milwaukee TV station about why I was driving through the storm. Between Milwaukee and Madison, the snow ended, and eventually disappeared. I stopped at a rest area to brush off the trailer (and snapped a photo first). Next to me was a semi whose driver was from Coventry CT! We chatted briefly before heading out again.

There are photos of the sparsely furnished one-bedroom apartment with my stuff inside. The closet in the bed room is huge, and will hide a great deal of my "stuff." As of today, the bedroom, bathroom, and kitchen are in great shape. The large living/dining area is a mess! All I have there is camping furniture (two chairs, a table, and a cot as a "couch").

The final photos are from Monday morning, December 4, my first day at work. What else but snow!

It took me more than a week to organize getting phone/DSL service to the apartment. That is one of the two major reasons for lack of posting. The other? Not much time! Every new job has a learning curve, and I have been placed where I am literally overwhelmed by just the names and faces, never mind that the whole governmental structure is different, and there are critical differences in the legal requirements for meetings, etc. That plus, when I get home at night, there is the whole cooking/cleaning part of life.

This post is being done from Connecticut....yes, I am back for the holidays. While I have a list of "homework" tasks to do, I will post more frequently for the next week, because I will have more unstructured time to do so.
Posted by Michael A. Golrick at 7:57 AM No comments: 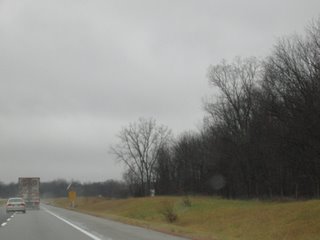 So, we all know about Library 2.0, right? Well when I hit the Indiana border, I found what I am calling Highway 2.0. The picture is small, but the sign says, "Animal on Road when Flashing -- Next 1 mile." There is a test stretch of the Indiana Turnpike where they have the signs, with solar panels and motion detectors, set up over a 15 or 20 mile stretch.

As someone who has killed two deer in his life, both times with a vehicle, I can attest to the problem. This is a great solution! It alers drivers to a potential hazard and uses current technology in an effective way. How 2.0 is that!!!
Posted by Michael A. Golrick at 9:15 PM 2 comments:

Blogging on the Road: Day 2 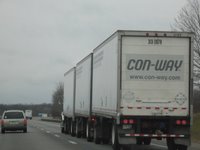 The trip from Youngstown to Winthrop Harbor (IL) was relatively uneventful. Rain in places, and heavy traffic through Chicago. The photo shows my first major reminder that I'd left the Northeast. We not only do not have "triples" but have very few "tandems." After all, the surface roads are so often narrow that even the long singles have trouble with corners.
Posted by Michael A. Golrick at 9:13 PM No comments: