Earlier this year a friend posted on Facebook about the bicentennial of Ulysses S. Grant (April 22). I quickly realized how little I knew about the 18th President. I knew he had been a general, and was the commander of Union forces who accepted the surrender of Robert E. Lee at Appomattox. He also had a reputation for being (depending on to whom you listened) a heavy drinker or a drunk. I also believed that his administration was wracked with scandal.

The book by Ron Chernow is massive. The copy I borrowed was in large print - and the text ran to 1,289. Those pages are followed by another 190 pages of notes, bibliography, and photo/illustration credits. (It is a pretty fat book at 1,479 pages!)

Grant was much more than just a general and a drunk. While this biography talks about his drinking issues, Chernow notes that whatever drinking Grant did was away from any significant activities. He was not ever drunk during a battle or a crucial time in his administration. Some of that credit belongs to one of his personal assistants, and to his wife Julia. He did have a "drinking problem," but especially at the end of his life, he seemed to be able to control it. According to this biography, he never drank leading up to and during a battle. He would occasionally go on binges. There were two people who helped reign him in, one was his wife Julia, and the other a long-suffering and long-serving assistant John A. Rawlins. It's a fascinating relationship, and there is one (much shorter) version of the story on History.net.

I strongly recommend the book. The description of Grant's political acumen and actions as President were not something I had known about. The election of his successor ushered in the era of Jim Crow, which undermined much of what Grant tried to do as both a General and as the President.

The very end of his life was sad in that he rushed to finish his memoirs (published by Samuel Clemens/Mark Twain) in order to leave funds for his wife. The next time I drive east, I will try to visit both his tomb (in New York City) and where he spent much of his final time writing in Saratoga Springs (NY). I suppose, his version of his life should be added to my reading list!

Posted by Michael A. Golrick at 7:00 PM No comments: 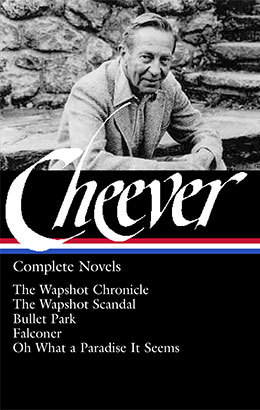 More on Cheever! I have now finished reading John Cheever's Complete Novels, also in the Library of America edition (902 pages, plus notes and chronology). As I noted about his stories, I feel like this should count for more than one volume ... There are actually 5 novels in this compilation (in order of publication - and presentation):

I feel like the short story was Cheever's metier and real strength in writing. All of his works are "of a time and place." Because it represents both a geography and a time period with which I am familiar, it felt comfortable to me - and likely his writing was well received by "the establishment" since it was so much about them.

I am glad that I read all of his works, and have an appreciation for what he describes.

Posted by Michael A. Golrick at 6:50 PM No comments:

John Cheever: Selected Stories and Other Writings - some notes

I just finished reading the Library of America's compilation of John Cheever's Collected Stories and Other Writings (1004 pages plus chronology and notes). The stories are more or less chronological in the order of publication, and are grouped by the collections in which they had appeared.

Many of the stories use characters and places which also appear in his novels - which gives a sense of continuity to his writings. He is clearly a gifted story teller. I had one friend ask (early on) if I had read "The Swimmer" (p. 726). I had not at that point, but it is an amazing story, and I commend it.

The Other Writings include works about other authors (Saul Bellow, F. Scott Fitzgerald, Malcolm Cowley) and a great little essay "Why I Write Short Stories." A sentence in that essay struck me a being very important:

"...they are read by discerning and well-informed men and women who seem to feel that narrative fiction can contribute to our understanding of one another and the sometimes bewildering world around us." (p. 996)


[In my list of books read this year, I feel like this should count for more than one volume!]


Death on Nantucket by Francine Mathews

Home Before Dark: A biographical memoir of John Cheever by his daughter by Susan Cheever

Tinderbox: the untold story of the Up Stairs Lounge fire and the rise of gay liberation by Robert W. Fieseler

After the Worst Thing Happens by Audrey Vernick ARC

Note Found in a Bottle: My life as a drinker by Susan Cheever

The Path Between the Seas: The Creation of the Panama Canal, 1870-1914 by David McCullough [Special note: cover is by my friend Wendell Minor]

The Paperboy: A Novel by Pete Dexter [from the bargain table at Blue Cypress Books]

Not God: A History of Alcoholics Anonymous by Ernest Kurtz

My name is Bill: Bill Wilson: His Life and the Creation of Alcoholics Anonymous by Susan Cheever

The Library Book by Susan Olean

The Manchurian Candidate by Richard Condon

"The Monuments at Gettysburg" by Thosmas A. Desjardin [1997]

"On the Bloodstained Field: 130 Human Interest Stories of the Campaign and Battle of Gettysburg" by Gregory A. Coco