Shore light
There is something about the air and light near the shore. Artists have known this for years, which is why there are so many seascapes. To me, I feel like I can tell that I am getting close to the shore just by the nature of the light – along with the vegetation. Certainly the American Impressionists (Childe Hassam, John Henry Twachtman, J. Alden Weir, Mary Cassat) knew this. It is why (in my opinion) so many of their paintings are from the shore. To me, it feels like they have been able to capture the light and feel of the shore.

For me, approaching the shore, feels like coming home.

Beaches
I love the beach. Always have. The part of this trip which was not about family and reunion was about the beach. (And one part was both family and beach.) On this trip I had the opportunity to visit a number of beaches and beach areas, some of them new.

My trip started with time on the Alabama Gulf coast. A couple of years ago, I discovered the joy of the Gulf beaches. Facebook friends know that I visited there just before Easter. The sand is soft, the water is warm. What is not to like? 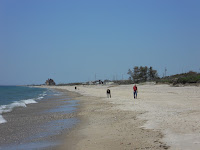 Great-great grandparents owned property on the beach which was destroyed in the Hurricane of 1938. The family legend has it that the “cottages” stood about where Misquamicut State Park is currently located. I headed to Matunuk Town Beach which is where my mother used to visit when she would spend a month at the shore after her retirement. I remember going to Carpenter’s Beach (about ½ mile away) even as a very young child (and probably before the town beach was developed).

The water is cold!! Probably in the mid 50s. Much to cold to swim, even on a very hot day. It looks like more beach has been lost to the ocean. The boardwalk at the Town Beach is much shorter than the last time I was there, and the pavilion with the rest rooms has been moved inland, again. The sand texture is fairly rough, and there are a large number of smoothly polished small stones/pebbles. One of the summer passtimes at the beach is often collecting “interesting rocks.” One of my sisters had family members collect them one summer and she painted our names on each rock, and then took photos of them for the family calendar (and other crafty uses). It is a beach I know and love.

Connecticut – Truth be told, I did not actually go to the beach. I drove through several beach towns, and ate a meal sitting on the dock in one of them. Like Rhode Island the beaches are rocky, and the water is very cold – even at the end of summer.

Driving through Delaware – I took the Turnpike through New Jersey, and got off the Interstate right after the Delaware River bridge. I headed down DE-1 towards the shore. Delaware sure has a lot of tolls. There was a toll for the bridge, and two tolls along the state highway – which was generally limited access to Lewes and the beginning of the beaches. The road goes through the edge of Dover Air Force Base, and through lots of rolling farm country. It was a pretty drive. At Rehoboth Beach the road turns due south and goes along the shore. It is, in some ways, a typical beach community. Strips with shops specializing in “beach activities” (towels, surf stuff, kites) and seasonal bars and restaurants. Since I was there right after Memorial Day, it did not feel overcrowded – school had not let out for the summer. It reminded me of parts of Cape Cod, in terms of the business communities. There were hotels, and silver-grey, cedar shingled cottages and buildings. I got glimpses of the ware from time to time. There were only a couple of tall hotels/condos. Most of the buildings were no more than 2 – 3 stories tall. [The Delaware Official Transportation Map is physically about the same size as many other state maps. Because Delaware is so small, that means that the scale is about 4 mile per inch. A fair amount of detail is on the map!] 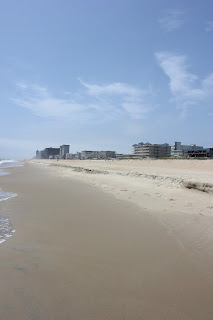 Maryland Eastern Shore/Virginia Eastern Shore – Delaware Highway 1, becomes MD Highway 528 at the border, just below Fenwick Island (DE). I spent the night in Ocean City, and wandered the beach a very little bit after doing the work-related webinar (as scheduled). There is not a lot of length of beach along the highway in Maryland. Just south of Ocean City, the road crosses the bay and goes inland. South of Ocean City are Assateague (in Maryland) and Chincoteague (in Virginia – but they are parts of the same island). I did not go to the park/seashore/wildlife refuge. Instead, I drove down US 113 and US 13 into Virginia. It is very different than the shore and road in Delaware and beginning of Maryland. It is clearly “beach territory” but you don’t get glimpses of the water. Many of the buildings (houses, condos, and even motels/businesses) are cedar-shingled which turn that wonderful gray near the ocean. Along the beach, there were not only many “traditional” older hotels (4-6 stories), but also a number of “resorts” with 10 – 12 floors. (Those were more reminiscent of the Gulf area.)

Chesapeake Bay Bridge/Tunnel – I was sort of disappointed in the bridge/tunnel. It was longer to get to from the Maryland shore – about 3 hours. When the person at the hotel said that, I did not believe him, but he was right. 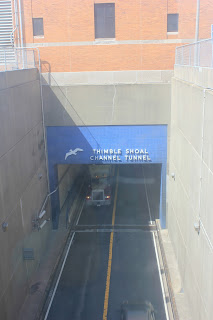 It is expensive, $13.00 was the toll – one way, and they collect at each end. The bridges are no higher off the water than the Lake Pontchartrain Bridge. Like that bridge, there are a pair of spans with two lanes in each direction, but for the tunnel parts, the lanes collapse and there are only two lanes in the tunnels – one in each direction. There are two tunnels. I stopped at the Virginia Beach side where there is a viewing spot and a restaurant/gift shop.

I continued on US-13 through Virginia Beach, and connected with VA-168 to head south into North Carolina. I picked up US-158 to get me into the Outer Banks.

The Outer Banks – I can see the charm. I can see why folks like to visit here, and even more so, why people live here. The beaches are wonderful! There are so many houses, and not nearly as many hotels/resorts. There are houses right along the dunes/beach. I stayed in Kill Devil Hills in an older motel from which I could walk right out the back door to the dunes and beach. I guess I should not have been so surprised, but while the air was nice and warm, the water, even this far south, was still pretty cold. According to the sign on the lifeguard stand, the water temperature was 58◦ F. Too cold for swimming!

There is a road closer to the shore (NC-12), which has mostly homes and a few of the motels. The “main drag” – a long block away – has more of the chain restaurants and newer construction. It is the business street. I really liked the area where I stayed, and am thinking about a return trip.

Ferries – I continued along down NC-12 the whole length of the Outer Banks. I stopped at the Cape Hatteras lighthouse. There are a lot of protected areas along the route, and not a lot of development. It is an incredibly beautiful area. I took the free ferry from Hatteras to Ocracoke, and then through Ocracoke to take the ferry (pay) to Cedar Island. The first ferry used to be about a 30 minute trip, but the shoals – which had been dredged – keep returning, so the ferry now takes a longer route through Pamilco Sound for an hour ride. On Ocracoke I had two choices: to go to Swan Quarter or Cedar Island. Since the latter was a shorter ride, and seemed to take me further towards my goal for the night that is the one I chose. 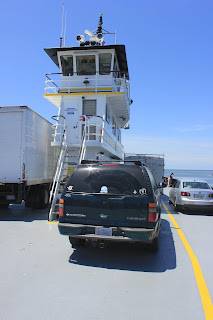 These two ferry boats, and the one I took earlier this year to Dauphin Island in Alabama, all reminded me of the Chester-Hadlyme Ferry. They are all smaller ferries than some others I have taken (Bridgeport/Port Jefferson, Block Island, Hyannis-Nantucket, Woods Hole-Nantucket, and even the Canal Street Ferry in New Orleans). They were all had open air space for the vehicles and a raised bridge which was much narrower than the vessel itself. The last ferry I took (Swan Island) was larger than the Hatteras Ferry. It had a small, enclosed lounge for passengers.

Back to the Gulf/Orange Beach to Biloxi – After returning to the mainland, I headed inland. I spent the night in Florence (SC) which is where I picked up I-95 for a bit. I then headed through Colombia (SC), Atlanta, and Montgomery (AL) before heading south before my final beach stay, back where my beach trip started: Orange Beach AL.

I was going to add some comments about sand and the nature of sand, but this is so long, I think I will make that a separate post.
Posted by Michael A. Golrick at 9:24 AM No comments:

ALA Annual Conference - Where will I be?

Since I have gone back into the pattern of posting this kind of info, here is my tentative, proposed schedule for ALA Annual. Note that it will change dramatically as I import events over the next day or so.