Yesterday was the delivery of #2 son to Bristol RI for his senior year at Roger Williams. After unloading the borrowed car and trailer, and lugging his stuff to the second-floor apartment, we went out to grab something to eat (allegedly lunch at almost 3 pm). Driving up and back, along Route 136, we passed a couple of farm stands.

My summer has been so very hectic, that we had not purchased any fresh corn on the cob. So we did. Jill and I brought the dozen (bakers dozen) home and had that (with a couple of leftovers) for dinner. Again tonight we had corn. There is something about the really fresh corn which makes it taste so much better than what you get in the grocery store. The only problem? Being so anxious to eat the corn, that the first couple of bites burn the roof of your mouth....especially that sensitive part just behind the two front teeth. It is, however, worth the slight pain!

I remember as a kid, timing our visit to my father's favorite farm stand so that we would arrive at almost the same time as the truck from the field. He would purchase a dozen (or two) ears, and we would rush home to eat it within the hour. That is how corn should be eaten. Of course, he also told stories about the summer before I was born, when he was covering New England as a sales rep, and my mother was staying on Nantucket. He would take the ferry back to Woods Hole, and then stop and buy a dozen ears of corn. He would cook the whole dozen and eat it (the whole dozen) for dinner. Now what I remember is that he would eat whatever was left, but with eight kids (ten people at the dinner table), even two dozen ears of corn did not go very far!


The other joy of summer -- home-made ice cream. While I was in Chicago last week, Jill and the kids made ice cream using fresh strawberries from our garden. Mmmmm, good! There is just something about home-made ice cream. Maybe it is the extra fat content, or the fact that it has less air than commercial ice cream (and is therefore more dense), but it tastes a whole lot better.
Posted by Michael A. Golrick at 8:09 PM No comments:

Where I am now

It is the week (actually more like 9 days) which I spend at the Junior Leader Training Conference. Last year I was the Scoutmaster, and this year returned to the position I have held for 6 years before -- Assistant Scoutmaster for Administration. 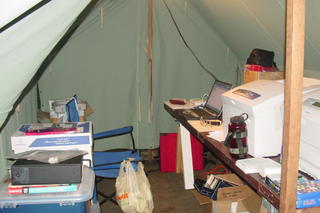 We are at Camp Sequassen in Winsted CT. I have two platform tents back to back. One has my cot (with mosquito netting) and personal gear, and the other is my office with a table made from a door on saw horses, and all sorts of files, papers, craft supplies, the PC (with 26 K dial up access), and printers. Last of all is the laminating machine. I tried to post a photo with my last post, but the connection was so slow the photo was lost. I'll try this.

Today is the end of Tuesday (Day 3), we will be done on Saturday at noon, to be followed by packing up and cleaning out!

Reflections on the Jamboree

An experience of a life-time. That is how most scout leaders describe a trip to the National Jamboree. I sent my sons, one to the Jamboree in 1997, and the other to the Jamboree in 2001. Like this one, they were all held at Fort A. P. Hill outside Bowling Green, Virginia. It’s about 20 miles from Fredericksburg.

I was honored to be chosen to serve as the Scoutmaster for one of the 11 troops which were sent from the Connecticut Yankee Council. As the 42nd largest Council in the nation, CT Yankee sends the second largest contingent of scouts and scout leaders to the Jamboree.

My Jamboree trip (not including all the preparation) started at a very early morning hour as we gathered at the send off point. The departure was covered live by the local ABC station. It was a madhouse. The boys quickly settled down for the 12 hour drive to Virginia. We spent that evening in the barracks at Ft. Eustis, just outside Williamsburg. Saturday morning we went to Busch Gardens for the day. The boys had fun….as did the leaders.

Sunday morning after religious services, we headed for a short walking tour of Colonial Williamsburg. It was warm, and we were actually glad to get on the buses for the trip to Fort A. P. Hill. We were met by the trucks carrying our gear (a semi-trailer and a large box truck). We spent Sunday afternoon and evening unloading and setting up camp. Monday, much of the day was spent setting up the gateway. (When my photos are back, I’ll do a separate post on that.) After that, the boys scattered to the four winds, trading patches and participating in the myriad of activities. One evening was set aside for Scoutmasters (and their Assistants) to visit the Action Centers. That evening, my three assistants and I went to the air rifle range (my eyesight is not great….I had 2 out of 5 shots actually hit the target!), the archery range (I did much better here), and “motocross” (which was really BMX bike racing). I challenged my 2nd Assistant, and he beat me the first time (because he got a great start), but I beat him the second. Call it a draw. The next morning a huge bruise started appearing on the inside of my left arm just below the elbow. It took me a day or two to figure out it was from the archery.

Other than walking around watching the activities, the other events I participated in were small boat sailing and SCUBA. I qualified for the SCUBA BSA patch, which I will proudly wear on my swim trunks next to the Mile Swim patch.

We were in our site for breakfast and dinner every day. We rotated eating with the four different patrols, and that was a good way to get a feel for how the Jamboree was going. Some of the boys were very outgoing and vocal – those I did not really worry about. It was checking on the quiet boys which took my energy. There were often issues of minor personality conflicts. It was extremely hot at the beginning and the end of our stay, and only very hot in the middle. There was a constant concern about dehydration and heat exhaustion. Only a couple of the boys in the troop needed medical attention for heat related health issues.

One of the things which surprised me was the psychic toll of being responsible for 36 young men whose parents had entrusted me with their care. I ate less than usual, and also had much more exercise than usual. I also had less sleep. I came back exhausted.

The boys had a great time. Part of the pay off was at the return. The ten buses pulled into the parking lot at about 7:30 in the evening. After unloading the bus, returning various items (including all the medical forms and medications), several of the boys came up to me for a hug good bye, and even a photo or two, one is pasted here.

It was the experience of a lifetime, and I would not have missed it for the world.

Posted by Michael A. Golrick at 9:58 PM No comments:

Update - What administrators do

Well, it has been one of those days...After several days, I finally completed my trek first through the emails, and then through the snail mail which arrived while I was at the National Jamboree.

Part of the afternoon was reading the incident reports which accumulated. These include all sorts of untoward events in the library. The batch ranged from a patron screaming about overdues (resolved when a family member called and apologized), to human excrement left inside the building, to a patron who has had a recent series of events where she did not control her bodily functions, to tacks left on chairs at the Internet work stations.

Then there is the paperwork. Time cards, absence slips. When they are dealt with in a timely fashion, it does not seem so overwhelming. Several weeks together....that's more work (and confusion).

I still have not read the minutes of the City Council meetings, and the newly adopted ordinances. However, I am almost caught up in reading Publisher's Weekly (PW). I really do not like the new look. I find the "foreword" quite distracting with the boxes below, and the various sizes of type. The columns are "loose" on the page, and I find my eye wandering -- and therefore I do not read everything.

I met with the Mayor's chief advisor about the hiring process for a new security officer. Of course there was the fallout paperwork from that!

In a recent email, I was pointed to an article on the future of public libraries which appeared in the UTNE Reader. I am not sure that I have completely processed what Chris Dodge is saying, but I certainly found some gems of ideas in there.

Today, I actually feel like my work-life is back under control. Of course, tomorrow is my last day in the office for just more than a week. At least this time I will have slow and painful dial-up connection, and a little time to deal with some of the issues.

I promise some more Jamboree reflections over the next week.
Posted by Michael A. Golrick at 3:20 PM No comments:

Email ThisBlogThis!Share to TwitterShare to FacebookShare to Pinterest
Labels: Day in the Life

Back from the Jamboree

I am back from the Jamboree. Not only did I not have any access at the Jamboree, the medical tent for Subcamp 4 did not get their promised wireless access (to the medical records) until the second to last day! The Scoutmaster in the next site had his ATT wireless card, and no signal! Verizon and Nextel had good service (they brought in extra COWs for the event.)

A longer posting, and photos to follow over the next week.
Posted by Michael A. Golrick at 10:07 AM 1 comment: