One of the books on my sidebar for the past few months is A Good Match: Library Career Opportunities for Graduates of Liberal Arts Colleges. It was published by ALA as part of its "ALA Research Series" and was written by my first boss as a professional Rebecca Watson-Boone.

It is a serious research work.

Rebecca surveyed librarians whose undergraduate degrees were from eight smaller (my judgment) liberal arts colleges -- mostly in the Midwest. They are:
There were 864 people who answered the survey which was 11 pages (in the book) and had a total of 82 questions, some of which were open-ended and others had multiple sub-questions. It includes a rather complete survey of the literature on career choices and paths.

It is *not* light reading. However, I think that the experiences of the alums of these selected colleges can be generalized to the profession. [I certainly can identify with many of the answers presented.]

It is an interesting work, well worth the investment of the time to read it.

In the interest of full disclosure, I worked for Rebecca at the University of Arizona in the mid-1970s. It was a temporary position as the Business Reference Librarian in the brand new Central Reference Department of the University of Arizona Main Library. Rebecca and I have stayed in touch over the years, primarily through ALA. She is now an independent scholar living in New Mexico (of which I am personally jealous).
Posted by Michael A. Golrick at 7:42 PM 2 comments:

I know that I am late....but I went away for the Thanksgiving holiday, and turned off electronics for the duration. Yesterday (Monday) was left to catch up -- both at home and at work.

I have been composing this post in my head for some time.

This year I am thankful for:
It has been an interesting and surprising year. It was just a year ago that I left Bridgeport to move to Wisconsin. It was the right decision.
Posted by Michael A. Golrick at 7:11 AM No comments: 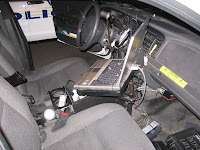 ridden "shotgun" in a police cruiser? Until tonight, I had not. Now, thanks to Leadership Eau Claire (LEC) ,I have.

Part of Leadership Eau Claire was an opportunity for a two hour "ride along" with an Eau Claire Police Officer. I got to sit in the seat at the right, for what turned out to be a three hour experience with Officer Greg Webber. Greg was a great guide, and was (I think) disappointed that there was no chase, no arrest, and no official reason to turn on the lights. [He did turn them on once, in the City Garage parking lot just so we could see what they looked like from inside the car.] Greg was candid and an excellent guide.

I got there early, and got the "shotgun" seat. Our first call was to take a complaint of harassment from what was a domestic dispute between two people who had been divorced for two years. We heard her side first, and then went back to HQ to pick up my LEC colleague. From the parking lot, Officer Webber called him for a long, rambling conversation. He followed up with a quick call back to her as we cruised.

The next call was to serve as back up for a complaint about underaged drinking. Since juveniles were involved, my colleague and I spent considerable time standing and waiting. The result of the call was for Officer Webber to write a citation (not the first for the party cited), as well as notify the City/County Health Department of possible violations over the state of the apartment.
We sat for some paperwork, and to "look for a violation." While cruising, we got a third call of a possible suicide threat. In a neighborhood not far from where I live, a man was "breaking up with his wife" who then threatened suicide. It turned out to be more of a domestic dispute than anything else, and did not take nearly as much time as first thought.

Then it was time to gas up, and return the car to HQ for the next shift. 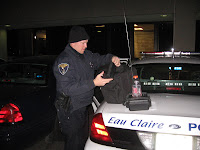 So what did I learn? Well, first that there is a whole lot more paperwork to policing than you might think. Second that cops often have interesting backgrounds. Officer Webber has a bachelor's degree in biology with a minor in chemistry (I think). He was a warden for the Department of Natural Resources and an officer in the County Jail before joining the police force. Third, that cops are often as much social worker as they are enforcement officers. It was an eye-opening experience. And I am glad I did not have to ride in the back of the car!!!
Posted by Michael A. Golrick at 12:28 AM No comments:

Conferences and Meetings -- Physical and Virtual

I started to write about this before the Thanksgiving holiday when I came across a post from Beth Hoffman. She cites several posts from Jason Griffey in his blog Pattern Recognition including this one with guesses about the finances. I know I wrote a comment which showed that Jason's guess were not far off.

Today, I find that my friend Karen Schneider has ratcheted the discussion up a notch. These were follow-up posts to one on defining a meeting, and another on defining the notion of work (within ALA).
Posted by Michael A. Golrick at 4:36 PM No comments:

I have been posting infrequently lately (and no, I am also not the Annoyed Librarian), and was way behind on my blog reading. However, a quiet weekend has allowed me to get completely caught up on my Bloglines reading.

There were two posts by Helen Blowers which caught my eye and got me thinking. I am going to talk about them in the reverse order in which she posted them.

The first was about her motto on leadership. It is a great motto! Now, I know that at least one of my readers will not be able to see the photo with the handwritten note, so here it is transcribed:

For me, it is a fundamental truth in leadership.

The other post is about Jack Welch. It links to a page on the Stanford Graduate School of Business web site which quotes Jack from a visit there. The quote is a good one, and does have a lot to say about leadership. It got me to wondering about how much he really believes it.

I lived in Fairfield County Connecticut when Jack was the CEO of General Electric. GE's corporate headquarters are in the town of Fairfield, and if you drive the Merritt Parkway (which I did daily for almost a decade), you drive right past it. My first recollection of hearing about Jack was as "Neutron Jack Welch -- he leaves the building standing, but most of the employees are gone." Indeed, to check my memory, I went surfing and found this quote (yes, it is from Wikipedia) which matches my recollection:

Welch has also received criticism over the years for his lack of compassion for the middle class and working class. Welch has publicly stated that he is not concerned with the discrepancy between the salaries of top-paid CEOs and those of average workers.

I guess I worry that a true (good/moral) leader is going to show many of the qualities which Helene points to, but should also care about those s/he leads. That is the sign of an authentic leader.
Posted by Michael A. Golrick at 8:34 AM No comments:

Email ThisBlogThis!Share to TwitterShare to FacebookShare to Pinterest
Labels: leadership

The latest edition of American Libraries Direct included what I consider bad news. Bernie Margolis, the President of the Boston Public Library [i.e. the library director there], is not having his contract renewed. On November 4, Boston.com (the online version of the Boston Globe) reported that the Board agenda included a discussion of not renewing his contract when it expires on June 30, 2008. Today's issue reports that one of the issues is about support for the branches.

While my current library has only one location, I have had experience with branches. One thing that annoys me about the article is the constant reference to the "main branch." That is an oxymoron! Either it is the "main" or "headquarters" or it is a "branch."

A key concept that people like the mayor of Boston clearly do not understand is that the health of a system is dependent on the main/headquarters location. While there are a few library systems without a "main" branch (Baltimore County comes to mind), for the vast majority, "main" is where the administration is, where technical services is located, where the historical archives, strongest and deepest collection, and most talented reference staff. If you do not support the central location, then the branches whither.

One analogy which occurred to me as I was stewing over this is to use that of the body. Part of what Bernie did with Boston was to do open heart surgery and made the Copley Square main library back into the key library it needs to be. What the mayor seems to want to do is to do major surgery on the arms and legs and leave the heart to disintegrate. (Yes, I may be over the top in the analogy, but I really believe that the mayor and library board do not understand this important relationship.

To me, it is sad because Bernie is such an articulate and thoughtful library leader. I know that he will land on his feet somewhere else. I have had a similar experience in the past and wound up in a much better place as a result.
Posted by Michael A. Golrick at 9:10 PM 1 comment: