We headed out of Boquete bright and early. Because it was a weekday, there was, of course, construction. This time the only detour was right outside Boquete (starting right after the tourist agency building at the top of the hill as you leave town), and it was never more than 1/4 mile or so from the main road.

We had an uneventful trip into David, and stopped for a morning break before heading out on the Interamerican Highway (the local name for the Pan American Highway). I had our wonderful map out, and we tooled along the road.

At one point, we were slowed by a demonstration. There were a group of protesters walking along the road. They appeared to be Ngöbe-Buglé and were chanting and singing. All along our trip that day we saw some roadside gatherings, and places where the road had clearly been blocked at one point. The first group had a police escort. I will search some, but I am interested in understanding the reason for their upset.

One of my goals for this trip was to visit the Pacific beach. I had originally thought to go to the beach nearest David, but the beach was towards the Costa Rican border rather than towards Panama City, so I gave up that idea.

I looked at the map, and about an hour or so from David saw Playa Las Lajas marked on the map. We read the guide books (well, Miss R read while I drove), and since we had plenty of time, we decided to give it a go. We turned off the main road, and drove a few miles towards the ocean.

I noticed the change in the light, and the terrain as we got closer to the sea. I don't know if it is my imagination, but it sure seemed like the light was that on the Cape (or as you get close), and the trees were sparser, and it just felt like we were getting to the salt water. 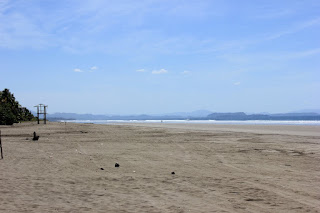 All I can say is WOW! The area was definitely not upscale, but there was a very sandy access road which I pulled into (and was grateful again to have an SUV). We got out, and it was much warmer and nicer than in Boquete (cool in the mountains) and David. The beach went out for miles....and it went on in either direction for miles. And it was essentially deserted. (Look at the pictures!)

Here is the link to the set on Flickr. Playa Las Lajas photos are not the last 3, but the four before that.

We got back on the road, and drove. The Interamerican goes inland for a bit, and cuts across a peninsula with some hilly country. It was funny, at times it seemed like we could have been driving in the high desert country of New Mexico or West Texas, or the high plains of eastern Colorado.

After a while, we started to look for a place to stay for a couple days. The guide books recommended one place which was (unfortunately) full -- even mid-week! We wound up at a large resort near Playa Santa Clara. It was a fun couple of days, and then home.

Because I was driving, and the road signs were not even minimal, there are no photos from driving across the Panama Canal, or through Panama City. Suffice it to say, we got to the airport safely, and headed back home.
Posted by Michael A. Golrick at 7:57 PM No comments:

We left David bright and early, and headed out of town. We had done this drive several times before on our prior trip, so we were not concerned about getting lost. They are doing road construction to improve the road, to replace some of the bridges, and to widen it to four lanes. It seemed like no big deal, until we got to a detour. My Spanish is "limited." (That may even be an exaggeration....I can read a few things, recognize key words, and often get a concept across. Road signs can be a challenge!) It took us far enough from the "main road" that I dragged out my trusty iPhone, and opened up the map/GPS application. I am glad I did, because otherwise, at the end of the detour, I would have headed off in the wrong direction. I think I mentioned that there are no route number signs, and very few directional signs!

We got to Boquete successfully, and found the place we were staying. We had to kill some time (having lunch, etc.) while our room was made ready. We reacquainted ourselves with the town.

Boquete is up in the mountains, and sits in a valley. The first day, it was sunny and warm, although breezy. Throughout our stay it was windy, and actually after the first day, it was mostly cloudy and rainy. We were staying on the other side of the river from the main town, and a little bit up the valley. We had a great view looking up towards Baru and the mountains. There are a couple photos in the Flickr set. (The last post in the series will have the link, I am still organizing the several hundred photos I took.)

After the weekend, we headed out, and that part of the trip will be the fourth post.
Posted by Michael A. Golrick at 9:41 PM No comments:

While we were escaping Mardi Gras in New Orleans, Carnivale was happening in Bocas. Little did we know. As we walked through town to the water taxi, there were large costumed characters in the town square. There was dancing and gaiety. Bocas is part of the heart of Panama's Carnivale culture.

We were out on Red Frog Beach, most of what we saw were large crowds on the beach. (Many kids, it was a school holiday...) The day after Mardi Gras, we ran into one of our fellow travelers to the island from the airport. She had spent a day or so on Isla Bastimentos and then went to Bocas Town. She asked how we did with the power outages. They had happened two nights in a row, apparently, and in both cases at the height of the celebrations. Our reaction? What outages? The island we were on must have had its own power, because we did not notice it. It made us happy to have been where we were.

After a happy few days, it was time to go. We had not made any definite plans for after our stay at Red Frog Beach. I made a plane reservation for what I thought was the right day, and we took the water taxi back to Bocas town. Once we got there, we looked again, and discovered that the flight was for a week later! I called both airlines, and neither had ANY seats out for a week! Plan B....we took a water taxi ($5 each, 20 minute ride) to Almirante (a large banana and oil shipping port on the mainland) and then a cab to Changuinola ($20 ride to a big banana center) where we rented a car.

The drive was interesting. 2-lane, winding roads through the jungle and coast to Chiriqui Grande. That is where we turned to go through the mountains and over the continental divide. This road was also two-lane with the added "adventure" of having not only more curves than the coastal road (which had a bunch), but also some steep grades. Oh, and there were the potholes. Some were really large! Part of the road goes through the Ngöbe–Buglé Comarca (territory governed by the indigenous people).

On the water taxi, one of our fellow passengers was an ex-pat who mentioned that the President (of Panama) was talking on TV that night, and that if he did not say the right things, there could be road blockages, as there had been earlier in the year. This was an impetus to get to David that night.

It took about 5 hours, but we made it. We got a little lost in downtown David while looking for a hotel. Our only prior visits to the city had been "through trips" to and from the airport. We had a good night's sleep and headed to Boquete in the morning.
Posted by Michael A. Golrick at 8:15 AM No comments: