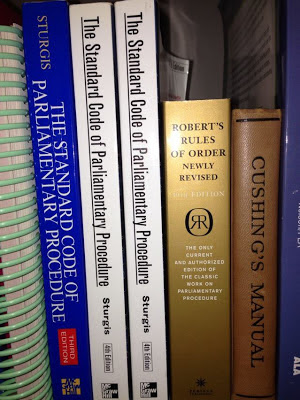 For those who doubted any part of my last post, here is a photo of a section of one of my book shelves.
Posted by Michael A. Golrick at 3:29 PM No comments:

I have not written about this topic for a bit, but a recent incident has prompted me.

I am a little bit of a "process junkie" and have been from way back. Maybe it was growing up in a large family (I have seven younger brothers and sisters). It definitely comes from my father. He was active in local "affairs." At various times he was on the Board of Health, served on state associations related to that, and had been elected to the Town Meeting. [Aside: in New England, some of the larger towns, rather than having a Town Meeting where everyone gets to speak and vote, there is a Representative Town Meeting, where  people run, and are elected to represent a district. The town I grew up in is one such town. There were about 20 (or more) people from each of the 6 precincts who served on the Town Meeting. My father was one.]

Next to his chair, there was a book case (of course), and among the things in the book case were a couple of editions of Roberts Rules of Order, as well as Cushing's Manual.(Here is the Roberts web site, as well as the Wikipedia article. here is the Amazon link to the latest edition of Cushing, mine is older!) He would take me to the Town Meeting, and I got to sit in the audience. Before and after, he would explain some of the intricacies of what was going on. (Well, also at the "smoking break.") I have to believe, that learning about this at my father's knee, is part of what has given me my love of process.

Well, on to my most recent experience. A library user came up to the desk looking for Mason's Manual of Legislative Procedure. I had never hear of it, but sure enough, the library owns it -- two copies, actually, one in Reference, and one in our circulating collection. She wanted to make some copies, so I directed her to the machines. In a little bit, she was back.

She could not find what she wanted. I took a look in the index, for a moment or two I was stymied. But then I remembered some of my lessons from ALA's wonderful Parliamentarian, Eli Mina. I thought, "how would Eli express this question as a parliamentary one." That was just what I needed. I looked in a different part of the index, flipped to the page, and there was exactly what she was looking for.

After she left, I took a closer look at the book. Now, everyone knows, well at least refers, to Roberts Rules of Order, but there are others. Actually the American Library Association uses the Standard Code of Parliamentary Procedure edited by Alice Stugis (4th edition). Over my years of service, I became familiar with the 3rd and 4th editions under the tutelage of two different parliamentarians.

When I opened Mason's, there is an introduction which includes a list of ten "principles that govern procedure in group decision making." What a revelation! One of the headers after the listing of principles is "Principles are easier than rules to remember and apply." I guess that if I had been paying closer attention to Eli Mina, I would have realized that. It is how he operates. That and there is a principle of fairness to avoid the tyranny of the majority.

The next time I chat (in person or electronically) with Eli Mina, one of the things we will talk about is the principles and why Mason's does not have as much "traction" as a parliamentary guide. Hey, I will admit it. This is the kind of geeky stuff that I find fun. One of the joys of my service on ALA Council was in finding a number of other kindred spirits.

This post was written over a couple days. I scheduled it to post on December 7. That is an important day to me. The "date that will live in infamy" was my father's 15th birthday. If he had lived, he would have been 86. This can be a little bit of a tribute who someone who died way too young for my liking. He was 48 when he died in 1975. I was 21.

Posted by Michael A. Golrick at 9:00 AM No comments: