Posted by Michael A. Golrick at 6:30 PM No comments: Links to this post 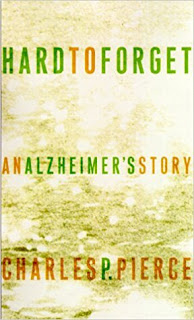 I recently finished reading Hard to Forget: an Alzheimer's Story by Charlie Pierce.

I don't usually read medical non-fiction. But having recently reconnected with a grammar school friend, we were talking about our high school buddies. Charlie and I grew up in the same town, close to each other, and for some of the early years of high school, we often walked to school together. I have been reading Charlie's stuff [off and on] for over 50 years. He wrote {for publication} in high school, and I would sometimes see his work in other places in more recent years. And, oh yes, this is *the* Charlie Pierce of "Wait, Wait, Don't Tell Me."

I have some vivid memories of Charlie's mother, but for me, his dad was a shadowy figure at best.

Part of what I enjoyed was recalling some of the scenery and geography of town.

This is a heart-wrenching, vividly told, brutally honest story. Charlie mixes his information gathering about this debilitating disease with how he and his family reacted to the progression of the illness. Everything from denial, to doing everything possible to help his dad.

It received excellent reviews when it was first published.

I am glad that I read it. In my professional life, "my" division of ALA includes a group of folks who provide services to those suffering from dementia and  their caregivers. As we baby boomers age, this will become an increasingly important service for public libraries to offer.

Posted by Michael A. Golrick at 8:00 PM No comments: Links to this post

It is that time of year again!ALA Elections.

I am asked about choosing candidates for ALA Council. Well, have I got good news for you ... one of my friends (and current LITA President) Andromeda Yelton has put together a tool to sort through the ALA Council candidate list. She has been doing it for a few years now, and it could be that this is the first time I have blogged about it, although I am pretty sure I have posted it on Facebook. Here is what she said:


Hi ALA people! Are you gearing up to vote in the ALA election. (<- answer="" be="" br="" here="" should="" the="" yes="">
This is my yearly candidate sorter. It lets you limit to people in particular divisions, round tables, ethnic caucuses, etc. (in addition to Cmd-F/Ctrl-F keyword search goodness). Hopefully it will make the job of finding people who represent you more manageable.

She also noted that there is a small issue:


(there's a javascript bug whereby if you have checked, then unchecked, a filter you end up with an empty page. you can reload the page to reset it. hopefully I will have time to figure it out and fix it, but if you know how, pull requests welcome)

Here is the link: https://thatandromeda.github.io/ala_candidate_filter/2018_ala_council.html

More on the election when ballots are released in about 10 days. (I am on the ballot again this year, but not the ballot which Andromeda parsed!)

Posted by Michael A. Golrick at 7:30 PM No comments: Links to this post

Email ThisBlogThis!Share to TwitterShare to FacebookShare to Pinterest
Labels: ALA, ALA Council, ALA Elections, American Library Association, elections

Living in Baton Rouge, Living in the South, and Lent

I cut and pasted this link in the summer of 2017. It was a year after it was written. It was written just after the Alton Sterling shooting. Go read the Wikipedia article, then read the "everythingisfinehere" post. I'll wait.

It’s not getting worse. It’s been there all along.

I spent a lot of years in Connecticut. For many of those years while I lived in Bridgeport, I worked in the suburbs - first Wilton, then Hamden. Both of them are pretty white. My kids went to school where they were in the minority (but not, as in this article, THE minority). I saw some of the issues outlined here. In the North they are often masked by artificial political divisions ... the City/Town line between Bridgeport and Trumbull, for instance.

Now go back and look again at the map. Can you find Florida Boulevard? It is amazing to me how graphically prominent it is. I will also note, that when I drive North/South in the city (or the reverse), I inevitably spend at least a full minute, and often more, waiting to cross Florida Boulevard. There is only one intersection that I regularly use where that does not happen ... it is the T-intersection at River Road and Florida where Florida Boulevard begins. Let me also note that I have driven from that intersection, along Florida Boulevard to Airline Highway without having to stop for a single traffic signal! The road is not only a geographical marker, but an actual physical divide.

Finally let me note. When I first moved to Baton Rouge, I stayed in the same Congressional District as when I lived in New Orleans. It is an amazingly gerrymandered district, drawn to maximize the number of black voters. Look at the map here. I moved south in Baton Rouge, a few miles, and am suddenly in a different district! (Actually, at my old place, it was 0.75 miles to work, and work was in a different district!)

The two most poignant quotes, which resonate most with me, are these:
Part of what I am (finally) beginning to realize is the incredible life of privilege which I have lived.

My challenge to myself this Lenten season is: What am I going to do about that?
Posted by Michael A. Golrick at 5:38 PM No comments: Links to this post

Here is the list of books I read in 2017. (Note that until March or so, this list also appears as part of the Currently Reading tab.

Retire in Luxury on your Social Security by Steve Garfink

The Reader by Bernhard Schlink

My New Orleans, Gone Away by Peter M. Wolf

The great game : the struggle for empire in central Asia by Peter Hopkirk

Teach me to forget by Erica M. Chapman

The Reasons You're Alive: A Novel by Matthew Quick ARC

The Sunshine Sisters: A novel by Jane Green

Get It Together, Delilah! by Erin Gough ARC

Two from the Heart by James Patterson ARC

Secrets in Summer: A Novel by Nancy Thayer

Leopard at the Door: A Novel by Jennifer McVeigh ARC

The Shores of Tripoli: A Novel (Lieutenant Putnam and the Barbary Pirates by James L. Haley ARC

Aging Out: A true story by Alton Carter

The Other Side of the Painting by Wendy Rodrigue

Posted by Michael A. Golrick at 9:20 AM No comments: Links to this post