I have now written several emails about this so I decided to blog it. Folks who know me are coming to town, and looking for places to eat. So, I have decided to cut and past from one of those, the general information which I am sharing.

ALA's Annual Conference will be at the Morial Convention Center which is located in the area generally known as the Warehouse District. The Convention Center is a long building (not very deep) which runs along the river for over a mile.

Let me point you to a web site, and give you some neighborhood names. The web site lists all the restaurants in greater New Orleans which are sit down, and not fast food places. There are over 1100. The web site is done and reviews are written by the food critic for the Times-Picayune, Tom Fitzsimmons.

Here is the web site: http://www.nomenu.com/ For any of the restaurants reviewed, there is a link to Google Maps (you may have to zoom in).

Now for the neighborhoods:

Warehouse District - This is the area nearest the Convention Center. These are all definitely in walking distance from meetings

CBD - This area is a little further away from the river, and is between the Warehouse District and the French Quarter. Some places will not be open for dinner since they cater to the business day crowd.

French Quarter - This is the area most folks think of as "New Orleans." It is bounded by the River, Canal Street, Rampart Street, and Esplanade. Loads of places to eat, many will be pricey.

Marigny and Bywater - These are funky neighborhoods on the other side of the Quarter (downriver) from the Convention Center. It takes about 15 minutes to walk through the Quarter from Canal to Esplanade. There is the riverside streetcar which will take you close.

Uptown, Riverbend, Carrollton -- (that is the order you go through them going out from the City towards where I live) are all further away, but very accessible along the St. Charles Streetcar line.

Now, if you want to be really adventurous, you can take the ferry (free) from Can 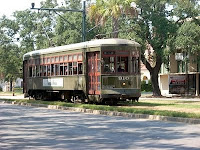 al Street to Algiers. Several times my wife and I have eaten at the Dry Dock Cafe which you can see from the ferry terminal. Oh, be sure to get on the Algiers Ferry not the Gretna Ferry. [There may be restaurants in Gretna, but I *really* don't know that area.]

Since I mentioned the streetcars, here is a link to the RTA site: http://www.norta.com/?page=home
Posted by Michael A. Golrick at 8:55 PM No comments: