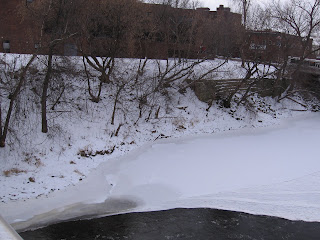 The Eau Claire River is finally freezing over. This photo is from two days ago, and there is another one on Flickr. The Flickr photos include notes.

I noticed as I drove home this evening that there are parts where the whole river is frozen over. Of course today was warmer than yesterday (high of 19 vs 15). It seems to me, as someone who is used to driving over bridges with tidal salt water that these rivers should have frozen earlier. I know that at least one "polar bear plunge" was cancelled because it was too cold (and now I can't find the link!). Those were words I thought that I would never hear in Wisconsin, at least not when the temps were above zero.

Next year, look for me doing one of the New Year's Day plunges!
Posted by Michael A. Golrick at 8:02 PM No comments:

To clean up my sidebar, I've taken the books I read in the second half of 2006, and consolidated them here.

New study on diet and exercise

One of my friends (no, I am not mentioning who), told me about this study. It basically tells me that I did it right.

Let me remind you that it is not easy, and based on anecdotes from some friends, my way won't work for everyone.
Posted by Michael A. Golrick at 2:20 PM 2 comments:

ALA Council and transcripts

One of the ongoing discussions among some of my friends (a couple of them now former Councilors, unfortunately) is about the ability to follow ALA Council proceedings from afar. Jessamyn West commented on one of my Flickr photos to this effect. Unfortunately, Jessamyn was not in Seattle and had absolutely no opportunity to follow the discussion.

As I drove back, through the dark, from the airport I began thinking about this issue. I'm not really sure how I got to thinking about it, but there was some strange mental connection as I saw a couple of planes beginning their descent. The road I drive (I-94) heads due east from the Twin Cities, and one of the landing patterns has planes fly over Eau Claire, and descend to the airport in a straight run.

I have been one of those reluctant to endorse having the transcripts fed to a site on the web. Karen Schneider considers this a simple technological task, and I have no reason to disagree with that. [Karen, if you post a link to your past comments, I'll edit and put it here!] The more I think about it, the more I am coming around to the view which Karen and Jessamyn have expressed, that in order to make ALA governance even more open, we should try doing this.

One of the concerns used to support the status quo is that the transcription is not perfect, there are sometimes amusing errors in both people's names and in some of the technical terms. One of the captionists has told me that ALA is the toughest assignment not only because of the amount of jargon we use, but the level of language we use is higher. (Librarians are educated and have larger vocabularies than the general population, and we like to show that off!) The transcripts or captions are not official. One concern is that if left on the web, they could be taken out of context. At the same time, I am becoming less convinced about the importance of these arguments, and think that we should just do it.

Karen and Jessamyn, you have convinced me. I hope that others are willing to join me as I try to make the association more accessible and governance more transparent.
Posted by Michael A. Golrick at 9:14 AM 4 comments: 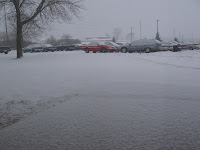 This is the view about an hour ago. It continues to snow lightly. I know that many here are happy to finally get snow, even though it is not my favorite kind of weather.

Yesterday it got into the 30s and melted the dusting which fell while I was in Seattle.

One of my New Year's resolutions was to post more often. I wasn't very good for the first few weeks of the year. I am trying to do better. Wish me luck......
Posted by Michael A. Golrick at 9:10 AM No comments:

I took a couple of photos of the Council meeting during the "ALA Executive Board/Council/Member Information Session." It shows two views of just the room, the sound board running the microphones, and a very dark photo of the staff work area. I get to sit here and listen (and blog). The Blogger Salon was fun (thanks to those from OCLC and all who attended).

One of my resolutions at this point is to both post more often and finally catch up on my blog reading.

In addition, I did DDR at the ALA TechSource booth with Jenny Levine. John Chastrka took the photo.
Posted by Michael A. Golrick at 12:25 PM No comments:

Email ThisBlogThis!Share to TwitterShare to FacebookShare to Pinterest
Labels: ALA Council 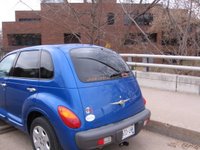 I'm not a cheesehead yet, but I have registered the car in Wisconsin. Upon my return from ALA Midwinter, I'll do the driver's license adventure. (That will probably be "bloggable.")

Lessons I have learned in Wisconsin:
I learned the first one painfully when I slipped on a patch of black ice while hurrying to a meeting at City Hall. I slipped, scratched my glasses (since repaired), got a gash on my forehead, and many bruises. Even my dress shoes now have at least a rubber insert. Not good for dancing.......but.

I learned the second lesson the hard way, also. However that lesson is more humorous than anything else.
Posted by Michael A. Golrick at 12:16 PM 2 comments: