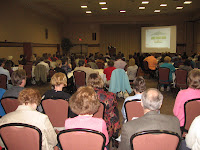 WAPL is the public library division of the Wisconsin Library Association. Each spring there is a meeting. For me it is a lot like going to the PLA National Conference because it is all programs!

He handed out both the slide show and the Executive Summary of the final report. The session was scheduled to be followed by a breakout session, which is scheduled to be repeated Friday morning. He started with one of his favorite jokes (I have heard him before). "An economist is someone who does not have enough personality to be an accountant." 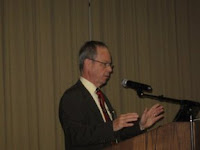 He started with an overview of the current economic situation including the shift from agriculture to manufacturing and now to services. The second shift is in the nature of work. The proportion of work that is "nonroutine interactive" has increased dramatically while "nonroutine manual" has decreased. The analysis was done using the Dictionary of Occupational Titles and the occurrence of skills required. The chart shows types of skills base-lined to 1960, and graphed them over time.

He gave the example of the new economy using Google which is about a decade old, and is already 6 times the market capitalization of Ford and General Motors. He showed the size of the US economy related to the size of other parts of the world. Total world population is 5.5 billion but the US population is only 0.3 billion. The world economy is $48 billion. The US is only $14 billion and the EU is $13 billion.

This was a basic introduction to the study. He held up the USA Today which had economics based stories all over the front page.

The study started in October 2007, the report is essentially done, and the presentation was the formal unveiling. There were surveys and focus groups and they reviewed other studies of public library impact studies. He reviewed the basics of impact studies which calculate the amounts acquired from various sources and spent. The model takes the direct economic impact and use the economic multiplier and calculate the "total spending impact." In Wisconsin that is $326 million. This is spending that mostly affects "Main Street businesses." A second part is jobs: there are 3,222 jobs, but another 3,058 jobs are created by the spending from people in the first set of jobs for a total of 6,280 jobs.

They also looked at the market value of services provided by libraries. He presented a chart which I will need to analyze more before talking about it. However it is included in the full report. They assigned values to materials, the value of a reference transaction, computer and Internet access (which has been consistently undervalued in prior studies -- Kinkos charges $0.30 minute), and then for programs. The total was $750 million which he advocates saying is 3/4 of a billion dollars.

After discussing the preliminary results they added values for meeting rooms, career and job info, periodicals and subscriptions, electronic databases, specialized materials, and wi-fi access. The best way to present the data is to talk about things like economic impact per capita.

The key message on the ROI is that the annual return for each dollar of public tax support is $4.06.

After some further review of the report, he ended with some observations:
It was a great summary of a report which will play a huge role in promoting the value of libraries in Wisconsin.
Posted by Michael A. Golrick at 8:43 AM