My daughter posted to her LJ account both a photo, and some wonderful thoughts about my mother, her grandmother. I thought about linking, but decided that it is probably more appropriate to quote her. She is a really great kid, and I just love what she says. Some of it is part of what I remember hearing also. Here is what she wrote (punctuation is hers, not mine, this is a cut and paste, the photo was her choice also): 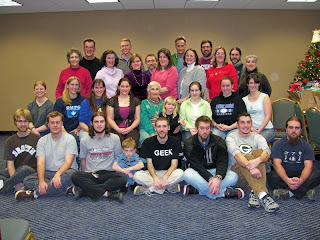 my grandmother passed away on wednesday. that's her in the middle, in the green sweater. i guess you could consider her a matriarch.

She was born in 1925. she grew up on riverside drive in manhattan. she told me stories of playing in the hudson and all around the city. she was turned into a paper doll. she was apparently hot stuff and went on lots of dates. she knew from high school that she wanted to do medical research. she went to brown when there was still a seperate women's school. she met my grandfather there, and about a billion generations on both sides had gone to brown. i know she graduated in 1947. i don't know when they married, or exactly what my grandfather did, but i know they had their first child, my dad, in 1953. she had 7 other children over the course of about 12 years. she did research at the worcester foundation for experimental biology at some point. my grandfather died in 1976 of melanoma. her father died some time in the '80s. growing up, there were always easters at grandmas. christmases at the church hall. summers at the beach houses. weekends when she would take care of me and my brothers. trips to mystic, the snapping turtles, the park with the duck pond. brown football games at yale and columbia. her charm bracelet with charms for all of the cousins that she would show to everyone. her "ask me about my grandchildren" license plate. she was the coolest person ever because she was the only one who could rightfully tell my dad to shut up. she was involved in girl scouts, brown sports foundation, a family care clinic, the inland wetlands commission, her church, and more groups that i can't even remember. there is a vernal pool named after her. she lived 7 months and 20 days longer than they gave her.
and that's just off the top of my head.
basically, she was an amazing woman.